Hong Kong will not tolerate algorithmic stablecoins in new regulation


CES hasn’t traditionally been the healthiest week for me. Aside from some unintentional intermittent fasting, TechCrunch really has the habit of doing it up with our team dinners at the show, to say nothing of Matt’s near religious devotion to a Mexican place named Tacos & Beer.

In my defense, I will say that there’s never been a year that I haven’t blown through my step count several times over every day of the show. Wandering the hall of the Las Vegas Convention Center will do that to a tech journalist. This year, of course, my steps have been suffering, as TechCrunch opted to attend the show virtually, amid omicron-related concerns.

If I’m being honest, those same concerns left me wondering whether I should be back at the gym, too. I’m sure I’m not alone in that, either. While it’s true that companies like Peloton saw regression as gyms and the like saw re-openings late last year, this pandemic is far from over. And the idea of being in a confined room with a bunch of other heavy breathers seems less than ideal, even as it’s currently too cold to do much working out outside in many parts of the country.

It’s always hard to project the longevity of these sorts of trends, but it’s pretty safe to say that the last few years will have proven a sea change for the world of home fitness. I’ve personally spoken with many people who don’t plan to go back to the gym after all of this is over (well, assuming all of this is ever actually over, I guess). That’s not entirely a symptom of the pandemic, of course — companies like Peloton and Mirror were gaining plenty of traction before many of us knew what a novel coronavirus was.

Of course, when it rains its pours with this stuff. My inbox has been bombarded with home fitness services for the past couple of years. It’s clear that as many companies as possible are looking to capitalize on this moment, and between Peloton’s earnings and transactions like Lululemon’s acquisition of Mirror, how can blame them? We certainly saw an uptick at last year’s all-virtual CES, but in 2022, they’re impossible to avoid.

Like any ultra-hot tech category, only a few will survive. Peloton was set to loom large over the event in more ways than one, including a keynote by CEO John Foley — though earlier this week, the fitness brand joined a long list of companies opting out of attendance. In spite of such concerns, however, there were plenty of products more than willing to fill that void.

LG’s offering in the category was far more conceptual than practical. If anything, the company’s stationary bike was designed to show off how its curved monitor technology could be incorporated into home fitness. Given the size of the product, it seemed like a pretty solid indictment of itself, given that space and price are at a premium for many looking to outfit their homes with exercise equipment.

I’m frankly surprised we didn’t get more attempts to jam the term “metaverse” into this year’s home fitness pitches. VR fitness app Liteboxer wins the prize there. “The dawn of the metaverse points to a demand for a deeper sense of connectivity,” co-founder and CEO Jeff Morin said in a release. “Virtual reality workouts connect people in a way that’s more meaningful than a 2D screen on a tablet, phone or computer. With just a VR headset and your will to win, anyone can now workout anywhere in the world with the best trainers, tracks and fitness technology.”

The “meta” word is mentioned four times in the aforementioned release. In this case it seems to be used fairly interchangeably with the term “VR,” as this is a title for the Quest 2 headset. Liteboxer VR arrives in the Quest Store on March 3, and will run $19 a month for a subscription.

Echelon showcased its EX-8s Connect Bike, designed to take on Peloton’s high-end Bike+, undercutting the product only slightly at $2,399. That’s a high price tag for a company that also makes uber-affordable products for Walmart. That price gets you, among other things, a curved 24-inch 1080p display and a customizable lightshow for the wheels. It’s set to arrive later this month. 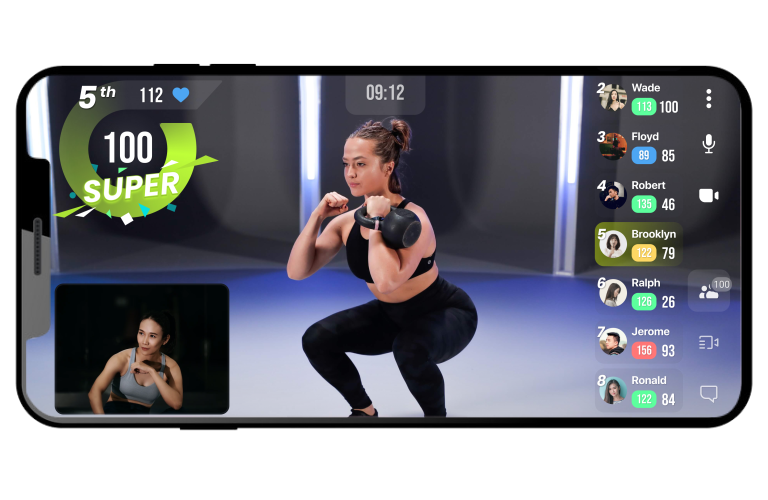 Image Credits: WonderciseWondercise, meanwhile, is a software-first solution. The company aims to offer a platform that’s designed to connect remote exercise buffs and break through some of the isolation that comes from switching from the gym to the home. Per the company’s press material:

The live leaderboard displays scores based on an individual’s technique, creating a fun atmosphere in sessions. Colorful on-screen power bars and profiles were intentionally designed to make the experience feel like a game, adding a competitive dimension to workouts. Wondercise is focused on bringing the Internet of Things to the fitness industry so everyone can get the performance analytics and data they need, wherever they work out.

As crowded as the home equipment category is getting, however, it’s nothing compared to software-first solutions, and Wondercise will be competiting directly with big names, including Apple and Samsung.

Hydrow, meanwhile, was one of the key companies representing home rowers. It’s a category beyond the saturated world of treadmills and bikes that’s prime for some real growth. Rowers offer a fuller body workout than bikes, though generally burn fewer calories. Peloton is rumored to be getting into the rowing machine game, but for now Hydrow looms as the big name in the space.