Mercedes-Benz revealed Monday the Vision EQXX, a concept vehicle that is meant to showcase what the automaker’s electric future will look like. The upshot? An eye-popping design coupled with advanced engineering that squeezes in power, efficiency and range into a compact and sporty package.

The EQXX is a halo car, which Mercedes said during a digital reveal ahead of the CES tech trade show went from idea to prototype in 18 months. The vehicle is meant be the foundation for its future electric vehicles. The aim wasn’t just to step up the exterior styling or add in a massive infotainment display — although that is indeed inside the EQXX.

Instead, the company used the EQXX as a proving ground of how far it can push design and engineering. The company focused on improving the energy density of its battery and boosting overall efficiency by reducing the weight of the vehicle using some lightweight materials including for the battery case and brake discs, an aerodynamic design that produces a drag coefficient of cd 0.175, ultra low-rolling resistance tires and a new compact electric drivetrain.

The electric-only chassis features a lightweight F1 subframe and notably the vehicle is outfitted with a 900-volt electric architecture, which Mercedes said proved to be an extremely useful research tool for the development of the power electronics. 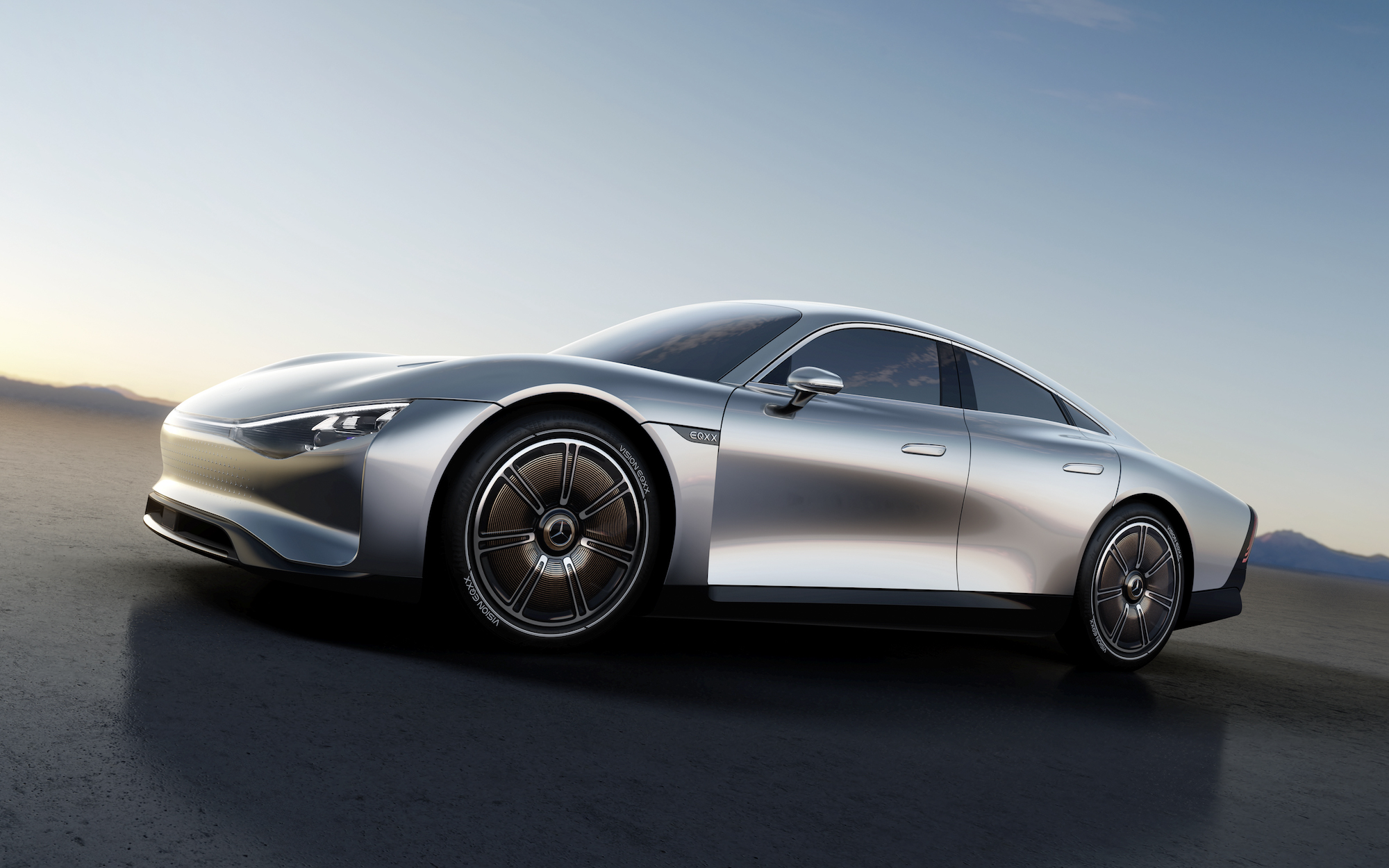 There are other added details too, including ultra-thin roof panels feed the battery system for up to 15.5 miles of extra range.

The end result is a vehicle that Mercedes says can travel 620 miles on a single charge and boasts 95% efficiency, which means 95% of the energy from the battery ends up at the wheels.

To develop this futuristic and efficient EV, the company tapped its R&D department as well as people from its Formula 1 and Formula E teams.

“They are proving that innovations from motorsport — where powertrains are already highly electrified — have immediate relevance for road car development,” said Markus Schäfer, Daimler AG board member and Mercedes-Benz AG’s CTO responsible for development and procurement.

Instead of just increasing the size of the battery, Mercedes-Benz and its HPP team developed a new battery pack with an energy density of close to 400 Wh/l.

The company said this benchmark figure is what made it possible to fit a battery pack with just under 100 kWh of usable energy into the compact dimensions of the EQXX.

“In effect, we fitted the energy of the EQS into the vehicle dimensions of a compact car,” according to Adam Allsopp, the Advanced Technology Director from HPP, who was referring to the EQS electric vehicle that was introduced in 2021. “The battery has almost the same amount of energy but is half the size and 30% lighter. The battery management system and power electronics have been designed with an absolute focus on reducing losses. In achieving this efficiency milestone, we learnt a lot that will flow into future development programs.”

The company was able to increase energy density in part from what Mercedes described as “significant progress” in the chemistry of the anodes, which has higher silicon content and advanced composition that allowed it to hold considerably more energy than commonly used anodes.

The exterior shows off a sloping front with a gloss-black grille with rose-gold highlights, plus a 2D star pattern on the front bumper. The headlights have two star-shaped elements with the larger one housing the low-beam and high-beam light arrays behind a center lens. Mercedes says this star arrangement and the 2D star pattern on the bumper paired offers a preview of front-end design detailing that will be featured in future models.

Moving to the back end is a surprise: a retractable rear diffuser. 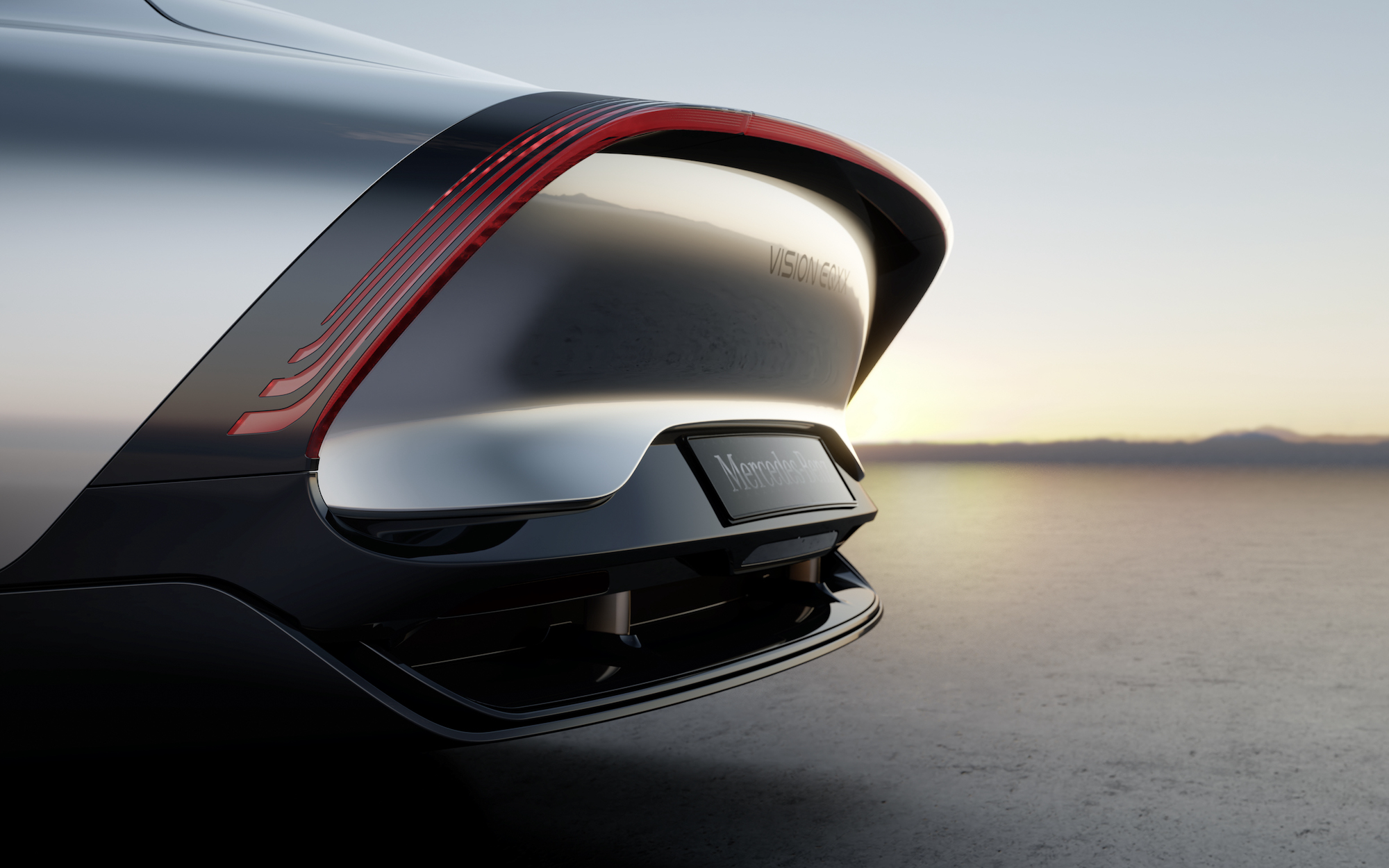 Inside the vehicles is a one-piece 47.5-inch LED display with 8k resolution. The infotainment screen will have responsive real-time graphics that will span the width of the vehicle, according to Mercedes. The automaker worked with NAVIS Automotive Systems to develop a 3D navigation system that users can zoom into and scroll around for this massive screen. And like the company’s newer models, the EQXX also feature an advanced voice assistant and software that learns your behavior over time. 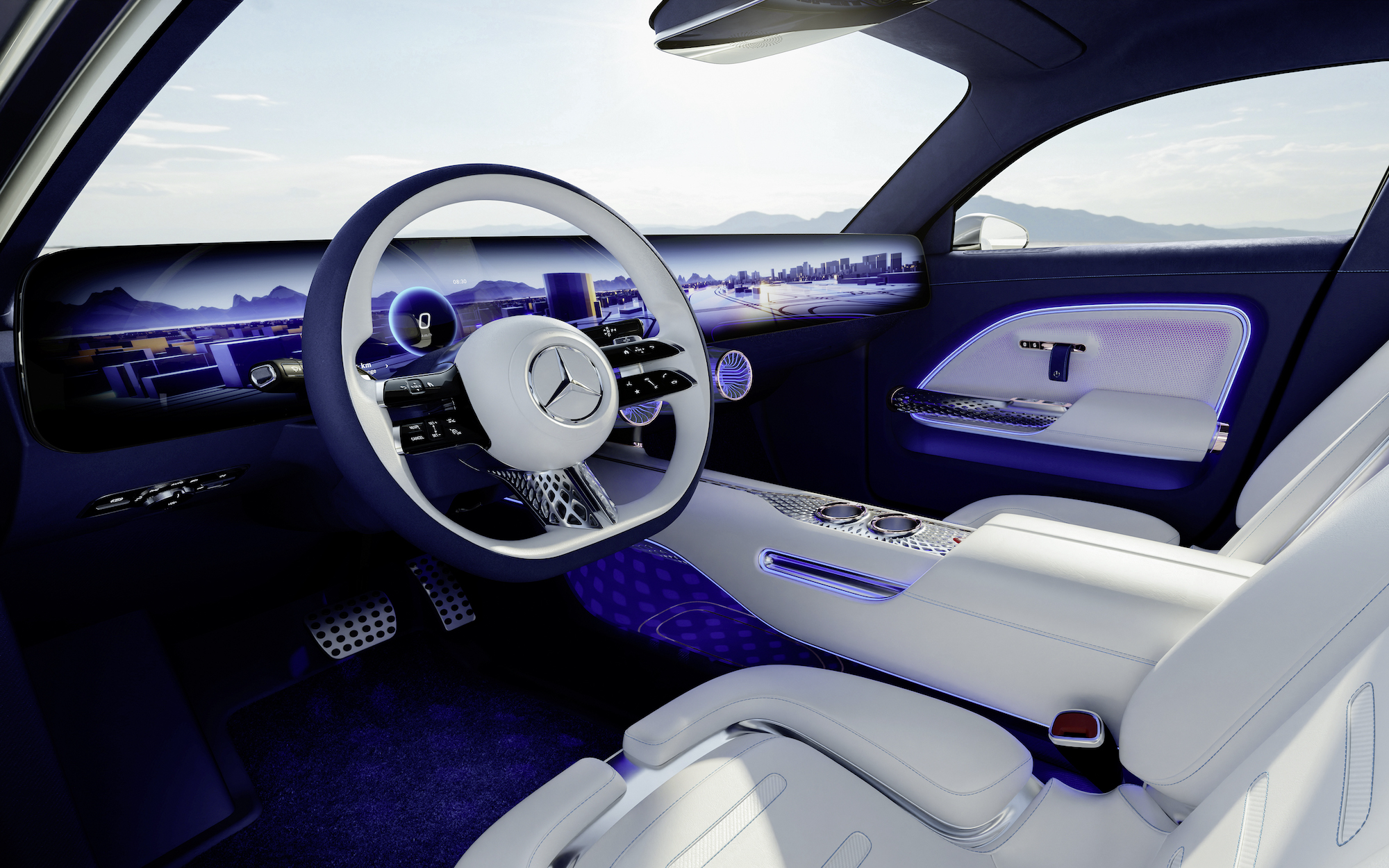 The company said that many of the EQXX features and developments are already being integrated into production, including the next generation of the Mercedes-Benz Modular Architecture for compact and medium-sized cars.