Ahead of the official start of CES, Samsung today revealed its vision for its next generation of smart TVs that will include everything from cloud-based gaming services to video chat while watching TV to even NFTs. The company says its 2022 Smart TVs will ship with a new “Smart Hub” that will offer consumers the ability to switch between different types of entertainment, including media, gaming via its new Gaming Hub, and “ambient” — the latter referring to the TV’s ability to display art, photos, or other information on the TV when it’s not in use.

For gamers, the most notable addition to the new TVs will be its game streaming discovery platform, the Samsung Gaming Hub, powered by Tizen. This service will allow game streaming providers to bring their game libraries directly to the TV. Samsung today announced partnerships with NVIDIA GeForce NOW, Google’s Stadia, and Utomik, and says more partnerships will come further down the road.

From the hub, Samsung TV owners will be able to browse available titles, search, and purchase games, and instantly play their favorites. Their game controllers will also be able to be paired with the new Gaming Hub, the company notes. Plus, users can easily access YouTube where they can follow favorite streamers to watch gaming content.

Select 2022 4K and 8K TVs and gaming monitors will also support the new HDR10+ GAMING standard, offering an HDR gaming experience with low latency, variable refresh rate, and over 120Hz. This experience features automated HDR calibration that does away with the need for manual calibration of settings across input sources, like consoles, PCs and more, the company notes. Supported TVs include the Neo QLED lineup with the Q70 TV series and above, as well as Samsung gaming monitors.

Samsung’s new Gaming Hub will launch later in 2022 and will be available through the main navigation menu across the Gaming, Media, and Lifestyle categories.

The addition of cloud gaming to smart TVs isn’t unique to Samsung. LG last year said it was bringing GeForce NOW to its WebOS smart TVs, as well as Google Stadia. Amazon’s Luna runs on its Fire TVs and Google Stadia works on a range of supported smart TVs, including those from LG, Hisense, TCL, Philips, and others. And of course, you can also access these services through streaming devices as an alternative.

Beyond gaming, the new line of Samsung’s 2022 Smart TVs will embrace other trends that grew in popularity over the past year or so, including co-watching TV and movies with friends and buying and selling NFTs.

During the early days of the pandemic, family and friends looked for different ways to connect and spend time together while under Covid-19 lockdowns and other restrictions. This led to a rise in co-watching services and features that let users stream entertainment at the same time as their loved ones. Hulu, Amazon Prime Video, and Disney+, among others, launched co-viewing features that let people stream a movie or show at the same time while in different locations. More recently, Apple launched SharePlay over FaceTime, which also supports Disney+ and other streaming apps, like NBA, Paramount+, Showtime, Apple TV+, and TikTok, for example.

Samsung’s take on this trend is to instead offer its own, new “Watch Together” app that lets family and friends video chat while watching a TV show or movie on their TV. 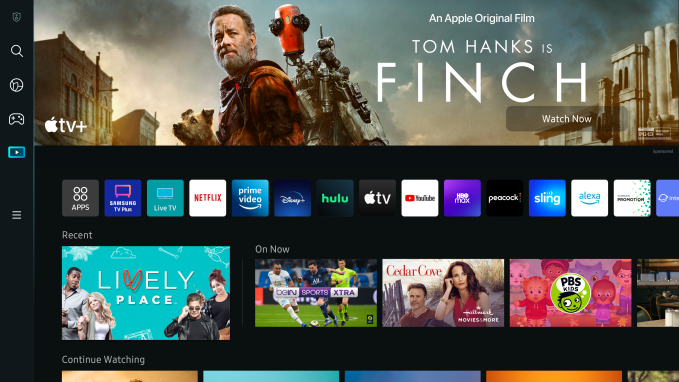 Another more odd addition to the Smart Hub is support for NFTs. The platform will offer an app that allows users to discover, purchase and trade their NFTs on Samsung’s MICRO LED, Neo QLED and The Frame TV models later this year.

“With demand for NFTs on the rise, the need for a solution to today’s fragmented viewing and purchasing landscape has never been greater,” the company told The Verge, when detailing what it calls the “world’s first TV screen-based NFT explorer and marketplace aggregator.” Users will be able to browse, preview, purchase as well as show off their NFT art on their TVs — the latter enhanced by a smart calibration feature that will automatically adjust the TV’s display settings to match the NFT’s creator’s recommendations. As users research NFTs, they’ll also be able to view the NFT’s history and the blockchain metadata. 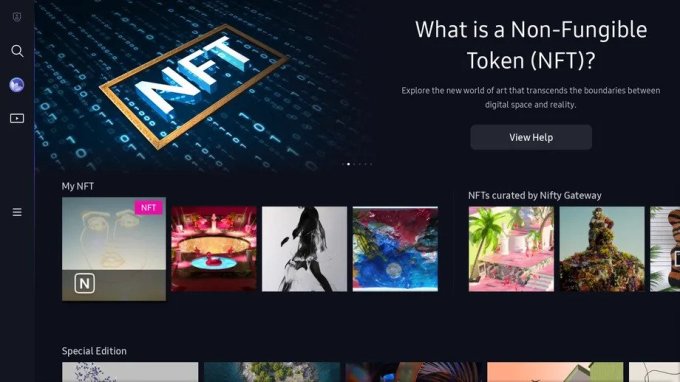 In addition to the included services in the new Smart Hub, the 2022 Smart TVs will work with accessories like an Auto Rotating Wall Mount and Stand, which allow users to rotate their screen to a vertical mode. This mode will support Samsung’s own lifestyle features like its Ambient Mode+ and Art Mode, as well as third-party apps like TikTok and YouTube.