I often look to the past for perspective on the present and the future. In a recent jaunt through the mind of Marshall McLuhan, I found a compelling shard of insight especially applicable today. In Understanding Media – The Extensions of Man, McLuhan writes, “Any innovation threatens the equilibrium of existing organizations. In big industry, new ideas are invited so that they can be clobbered at once. The idea department of a big firm is a sort of lab for isolating dangerous viruses. When one is found, it is assigned to a group for neutralizing and immunizing treatment. Therefore, no new idea ever starts from within a big operation. It must assail the organization from outside, through some small or competing organization.” As with most perspectives, they usually cannot be universally applied.

There are a number of organizations that thrive on imagination and reinvention, but history shows other examples where innovation took a backseat to legacy operations. Consider that Kodak had the opportunity to bring the digital camera to market in 1975. Steve Sasson was a research engineer at Kodak, and in December of that year he invented the first digital camera. The eight pound device led to further discoveries that power digital photography to this day. Sasson was reimagining a process for capturing still imagery while in the confines of a bureaucracy that thrived on a legacy process to do the same. Since it was a filmless technology, it threatened the company’s core offering of film. In support of McLuhan’s assertion, innovation of this magnitude proved impossible within a company that lacked incentive for that innovation.

DAOs are a vehicle for collaboration that harnesses the power of a collective imagination capable of reinventing existing processes from the outside in. One industry ripe for reinvention is higher education. To be clear, there are wonderful things happening on college campuses around the world with contributions by groundbreaking professors and researchers, but some would argue that the bureaucracy present in most university systems actually limits their intention and potential.

EduDAO is a community of blockchain organizations from Harvard, MIT, UC Berkeley, University of Pennsylvania, University of Southern California, University of Michigan, Tsinghua University and Oxford University charged with growing and resourcing an ecosystem focused on research and innovation in Web3. EduDAO began as a proposal to BitDAO, which is an ethereum-based open finance and decentralized tokenized economy. BitDAO was funded by Peter Thiel, Founders Fund, Dragonfly Capital among other venture funds. More interestingly, a large part of their funding comes from the cryptocurrency exchange Bybit, which has pledged 2.5bps of their future trading volume to BitDAO’s treasury. BitDAO also builds their treasury through contributors, partners and token holders.

Based on their proposal to BitDAO, EduDAO aims to support research, education and entrepreneurial ventures related to Web3, while helping other universities create their own DAOs to connect into the larger EduDAO community.

From BitDAO’s whitepaper, their mission is to “support builders of the decentralized economy, and showcase the potential of DAOs … to support a wide range of ideas, and experiment with the full range of options for economic alignment, governance, treasury management, and organization.” BitDAOs growth strategy involves helping others create and resource communities driving innovation in Web3. 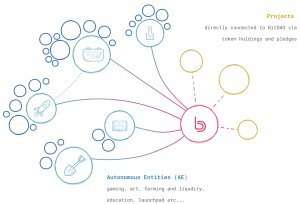 EduDAO began as an idea within the BitDAO ecosystem that moved to a proposal, and they are aiming to short-circuit the bureaucracy that can exist between universities themselves as well as between universities and industry. There is a compelling feedback loop between these two DAOs as their interests are aligned in a mutually beneficial relationship. The core focus on building communities with fractal expansion resonates from both of their vision statements and whitepapers. The relationship is based on a $33M investment from the BitDAO treasury with EduDAO managing $11M annually to allocate toward projects, grants and research in the EduDAO ecosystem. In turn, EduDAO university groups will feed BitDAO’s protocol development, treasury and governance as well as resource other BitDAO projects. 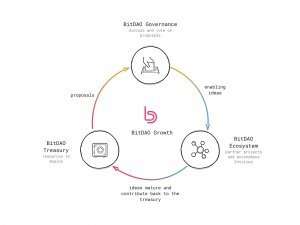 Symbiotic relationships point back to natural systems, and natural systems are finding their way back into legacy structures from the outside in. While the whitepapers and missions seem to be the change that we’ve been waiting for, we look forward to tracking the progress of innovators like EduDAO and BitDAO in future dispatches of DAOnload.