LinkedIn is launching interactive, Clubhouse-style audio events this month in beta; a video version will come this spring – TechCrunch


LinkedIn, now with more than 800 million people listing their professional profiles to build out their careers, is taking its next steps to get them to spend more time on the platform. The company is rolling out a new events platform, where it will be listing, hosting and marketing interactive, virtual live events. It is starting out first with an audio-only product that it will be launching this month in beta, followed by a video version that it will launch in the spring, initially targeting Creators that use LinkedIn as organizers and hosts.

With virtual events finding a lot of traction in the last couple of years of pandemic life, the plan for now is for LinkedIn’s new events product to be an all-virtual offering, and to open up the format to be shaped by those running the events themselves.

“Our philosophy is to put the organizers in control,” said product manager Jake Poses in an interview. “We want to make it easier to host virtual round tables, fireside chats, and more. Some may want the event to be more formal, or less formal. Some might want to communicate with their audience, to open up to the floor. We’re giving professionals interactivity and support.”

If the audio event feature it is launching this month sounds familiar, it is: this is the Clubhouse rival that we first reported LinkedIn was working on back in March 2021. LinkedIn has over the last year been experimenting with other features that it might add to this events service, such as a paid, ticketed option that it started testing in September last year — although for now, Poses confirmed that interactive events are being launched as a free service, with no plans for ticketing at this point.

(LinkedIn should probably not wait too long to introduce ticketing… I asked, and a Clubhouse spokesperson confirmed to me, that the startup is, as “part of [its] creator-first mantra”, Clubhouse is “exploring multiple options to allow creators to further monetize their work which includes ticketed events,” but with no timeframe specified. She also confirmed that video is not on the roadmap for now: “The company remains focused on social audio experiences, and is continuing to explore how new audio-centric features can enhance that experience for the community,” she added.)

A mock-up of how the audio event will look is here:

When it launches later this month, the new events platform will include tools to run interactive content end-to-end, with no need to use any other third-party software: hosts will be able to record and run the event straight from LinkedIn, and it will feature tools for online attendees and hosts to speak to each other in live conversations and to moderate discussions; and for attendees to communicate to each other both during and after events take place. LinkedIn will also, naturally, list events and help get the word out about them across its platform.

As for who will be hosting these events, the platform initially will be targeting individuals who are already using LinkedIn to connect with wider audiences — its own stable of Creators, as you might get on other social platforms like TikTok, except these are building content aimed at career development, professional topics and other LinkedIn-centric areas of expertise.

LinkedIn has been working on cultivating a wider and more active Creator community in the last several months. To this end, it even launched a $25 million fund and incubator last autumn, and Poses said that there are now 1.5 million Creators using LinkedIn Live, the broadcast product. Creating and hosting events is a natural fit to extend that strategy.

Poses added that over time LinkedIn also hopes to get businesses and bigger organizations to build events on LinkedIn. With the bigger organizations, however, often come bigger budgets, more infrastructure aimed at higher production values, and potentially ticketing and other services. He said the idea will be that those who need or want to will be able to integrate third-party apps and software into the production mix. (Indeed, he also confirmed that for now the whole stack has been built at LinkedIn itself — rather than leaning on any video or other software from Microsoft, which owns LinkedIn.)

A mock-up of how the video feature might appear in the feed is here: 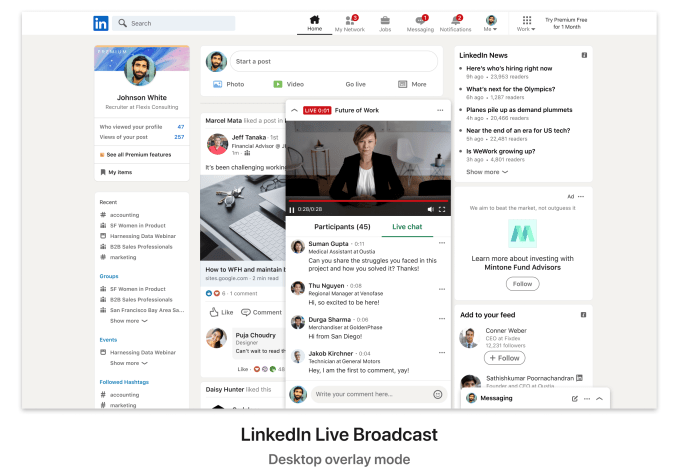 LinkedIn’s interest in doing more in events goes back some way, starting with an Events hub that it first debuted in 2019, before the days of the pandemic and with a focus on in-person get-togethers. Some months into the COVID-19 pandemic, LinkedIn formalized some of the ways that it was being used in more virtual events scenarios with the launch of online polls and broadcast-style video events aimed at virtual engagement.

Those have been doing well for the company. Poses noted that annual virtual event creation has grown by 150% over the last year, and it has seen a 231% increase in LinkedIn Live virtual event attendees in the same period. The topics covered have included AI innovations, opening keynotes, financial planning, live home installations, mentorship, cybersecurity, and award ceremonies. (These also point to how LinkedIn longer term may well have more than just individual creators running these events.)

LinkedIn has also been using its size and financial muscle to invest in and acquire other interesting companies working in the events space. Last June, LinkedIn disclosed that it was investing in virtual events juggernaut Hopin — which was valued at $7.75 billion in its most recent funding round in August 2021. Last August, it also acquired a startup called Jumprope, which let creators make and share how-to and other mentoring videos. (In fact that is how Poses came to join the company and lead product covering creators, events and video.)

All of this is not only the next logical step for LinkedIn in its own content strategy, but it also definitely feels like a sign of the times, given how, two years into the pandemic, many of us are still working from home, and Covid-19 remains a threat to many.

Still, you can’t help but wonder how and if LinkedIn will be impacted by the fatigue that has set in for a lot of us around virtual videoconferencing and frankly virtual everything, and if LinkedIn could adjust if it turns out that one more virtual events option, is one too many.

Poses’ answer to this is both to defend virtual events as a must-have for more democratization, but that some event creators might also choose to take a hybrid approach.

Virtual and hybrid may be “the future”, Poses said, but interactive events are setting out to fix something completely different.

“As long as I could remember, I have gone to talks and meetups. These are the mainstays of how professionals communicate and learn things,” he said. “But they require money, time to travel, courage to go into a room and speak, and space to run an event. Our belief is that moving from in person to virtual is actually democratizing and opening up access to many more people.”