3 tips for trading Ethereum this year

Software stocks get punched in the face (again) – TechCrunch


Some of the most high-flying stocks of the pandemic are struggling in the new year and it’s bad news for tech companies of all sizes.

TechCrunch noted yesterday that software stocks were having a pretty poor start to the year. That was, it turned out, only the beginning of the damage. Today’s trading took yet another bite out of the key tech sector.

Observe the following five-day chart of the WisdomTree Cloud Computing ETF, which tracks the Bessemer Cloud Index, long a key barometer of the performance of modern software shares: 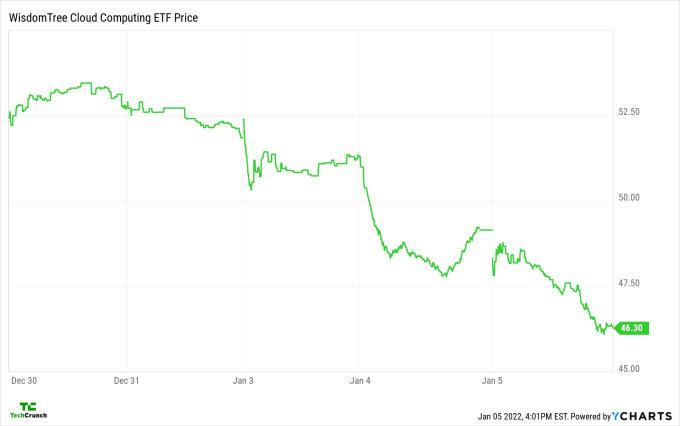 Per YCharts data, the index closed at 46.30, or some 29% and change from its recent all-time highs. The turnaround in the value of software stocks is pretty wild. Today alone the index shed 5.91%.

For a sense of scale, a 10% decline from highs is considered a correction. A 20% decline is a technical bear market. And a 30% decline? I think that’s called a shitstorm.

The disconnect that we discussed yesterday of the private markets staying incredibly bullish while public markets run colder on some of the hottest startup categories is underscored by today’s trading.

But it’s worth noting that there is quite a lot of momentum to today’s pace of startup investment, hinting that the stock market’s decision to revalue software stocks may take some time to trickle down to the startup level. What do we mean? That venture capital funds have already been raised at particular dollar amounts and investment schedules. This in essence sets up a lot of big, high-priced startup rounds to get done even as their future exit window tightens; it’s going to be harder to land an up exit if the public markets keep their minds changed regarding the value of software revenue.

In more on-the-ground terms, startups that today raise, say, a Series A that values them on future revenues are setting up a challenge in which they have to keep raising at high revenue multiples as they grow. This will become a more difficult narrow to shoot as they scale through later rounds. The closer those startups get to IPO scale, the more that public markets will impact their ability to price their shares. Falling public prices and fat private valuations will get into a tangle at some point. And there are a lot of unicorns out there that won’t fare super well on the exit front if stocks keep falling as they are.

Not a great start for 2022 for your local venture capitalist’s near-term liquidity chances, it appears.