The Amazon Glow is a somewhat buggy blast – TechCrunch


I’m annoyed that the magic black box on the table occasionally seems unable to track my hands.

My three-year-old, meanwhile, doesn’t seem to mind at all. He’s laughing so hard he can barely breath as he repeatedly vacuums up dinosaurs his grandma is putting on the table from 200 miles away.

I suppose none of that really makes sense out of context, so let’s rewind a bit.

We’re playing with Amazon Glow — the new one, not to be confused with the other thing Amazon named “Glow” just two years ago.

Take a touchscreen and make it stand upright on its own. Give it a projector that can blast images onto the table in front of it, and two cameras — one to capture video of the person in front of it, and another, pointed at the table, to detect where your hands are and let that projected image act like a touch screen. That’s the Glow.

The Glow is meant to let kids* play, read and video chat with a strictly curated list of family and friends from afar. The screen up top always shows the person they’re talking to. What they see projected on the table, Grandma — or whoever — sees on their tablet. When Grandma turns the page in her book, the page on the kid’s end turns as well. When one side draws, the other sees it too.

The whole thing is built up around Amazon Kids+, a premium subscription service (separate from Prime) full of kids books, games, movies and TV shows. Only the books and a handful of games work with the Glow; video content doesn’t show up on the Glow, which is probably the right call or my kid would just demand Blippi 100% of the time. Kids+ is free for a year with the purchase of a Glow, after which it costs $3 (or $5, if you don’t have Amazon Prime) per month.

The book selection seems good, particularly for a younger audience. The games are all simple, multiplayer-y things like memory matching, chess, a pong-style arcade game and a drawing app that throws me back hard to the days of sitting at my dad’s computer for hours on end to draw in Kid Pix. Except this time it’s projected onto a table, and my kid is co-op drawing with his grandma across the state. She places a dinosaur sticker on the screen; he uses the vacuum (erase) tool to gobble it up. They both laugh. Rinse and repeat about a million times.

Each person a kid can call has to be explicitly whitelisted by their parent’s account, and has to have an Amazon account. Getting that set up might take a bit depending on how savvy the other person is — but once it’s all configured, you won’t have to do it again. I like that whitelisting system because it means my kid probably won’t accidentally end up talking to a stranger.

The Glow is a device very much born from the pandemic, and from a time when seeing family in person — especially older members of the family — can feel like tempting fate.

“But wait,” you ask. “If they just want to talk with Grandma remotely, can’t they just FaceTime while using a reading app or something?”

Yes! Of course. And yet…

There’s something different about the Glow. My kid treats it entirely different from FaceTimes, or Zooms, or whatever. It feels different to me, too. 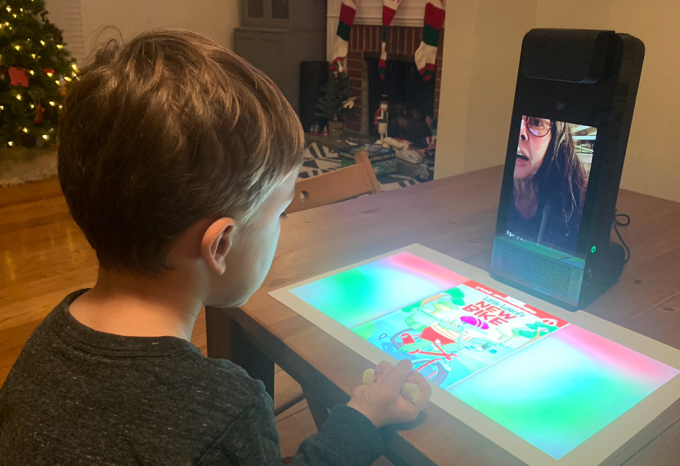 Something about the design gives the person you’re chatting with… presence? Maybe it’s because you can’t really move the Glow around during a call; there’s no battery, so it flips off the second you unplug it from the wall. Maybe it’s because you’re interacting with something on the table and then looking up to someone on a separate/dedicated screen, nearly eye-to-eye. It feels less like staring at a screen, more like sitting at a table around a boardgame.

Whatever the case, it’s weirdly effective. My kid will usually spend about five minutes FaceTiming with Grandma, showing her his toys, and then running off to do something else. When I ask if he wants to call Grandma now, he specifically requests they “glow” (using it as a verb) instead. He’ll gladly sit in front of the Glow playing and reading with Grandma for a solid hour, bugs be damned.

The Glow is sort of strange in that it’s kind of out now, but also kind of not. It’s part of Amazon’s “Day 1 Editions” program, which is really a more marketable way of saying “products you buy when they’re still in beta.” You request an “invite,” Amazon chooses who gets to buy it, and said chosen ones get to play with things a bit early while Amazon tinkers. It costs $250 if you get it as part of the Day 1 program, and will cost $299 after that.

In a program like that, bugs come with the territory. And the Glow, as it currently exists at the end of 2021, has them. It fails to detect touches somewhat frequently (it seems particularly iffy when the kid is wearing longer sleeves), making a “KLONK” sound and throwing up an error (for both users!) when it gets confused. Books and games occasionally fail to load. Sometimes it just randomly resets.

There are also some bits that are less bugs, more just rough. Such as:

All of these things seem like issues that can be fixed. And I hope Amazon does! Because with a bit more polish, and more content added over time, the Glow could be a really, really sweet little device. But how much love it gets from here is unclear; we’ve had it around our house for weeks now and, if there’s been patches, they’ve been… subtle.

But even in its current form, there’s a lot I like. The projected screen is nice and bright, picking up some extra brightness and tactility from a bright white roll-out mat included in the box. I’ve never had to adjust the room’s lighting to make it work. It’s very quick to set up and tear down if you don’t want it sitting out all the time — something Amazon clearly considered, as the box it comes in acts as a very nice, durable storage container. If you do want it out all the time, there’s a physical shutter switch you can use to cover the camera for added privacy. I also like that Amazon promises to replace it for free if it breaks in the first two years, because, well, kids break things.

But my kid doesn’t care about that stuff, either. He just wants to vacuum up more dinosaurs.

I like to end my reviews with a simple question: Once I send this loaner review unit back, would I buy it? In this case, I already have. Or, at least, I’ve requested an invite to buy one. Partly because I think my kid would be very bummed if he couldn’t “glow with grandma” again, and partly because I honestly just like that uniquely physical presence it gives his grandparents when they call.

Should you? If your kid is already content with FaceTiming their grandparents, maybe not. If books and drawing and basic games won’t keep them interested, maybe not. If you’re not willing to put up with a bug or three while Amazon figures out what this thing means for them in the long run, maybe not. But if that all sounds fine, it really is a lot of fun.